Winning Tennis with the Tactical Point Control System: How to Win Tennis Points Against Any Opponent (Paperback) 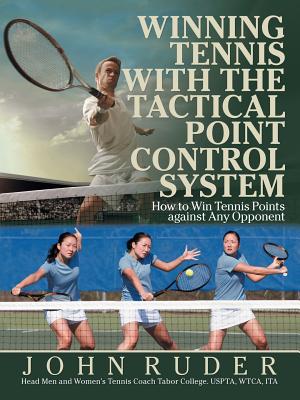 Tennis is not a game for the faint of heart. It is one of the few sports where a player must not only keep score but also act as both umpire and referee. A tennis match has no time clock, no halftime, no timeouts, no substitutions, and can last anywhere from thirty minutes to four hours. During that time, players may run over five miles and hit well over a thousand shots. In the end, both the thrill of victory and the agony of defeat rest solely upon the players' shoulders. So what can a player do today to win more games than not? John Ruder relies on thirty-five years of coaching and teaching tennis to share a Tactical Point Control System that breaks the tennis point into four distinct phases, teaches competitors how to play in each phase, provides a checkpoint system that allows players to discover why they are winning or losing each point, and shares guidance on how to develop a game plan that enables players to better compete against opponents of all levels. Winning Tennis with the Tactical Point Control System shares a simple and effective game plan that allows tennis players to excel in the game and score points against their toughest opponents.

John Ruder has been coaching for thirty-four years. He has been a ranked player in both the Southwest and Texas divisions of the USTA. John is a United States Professional Tennis Association professional (USPTA) as well as a member of the Intercollegiate Tennis Association (ITA) and the Women's Tennis Coaching Association (WTCA). John attended Olivet Nazarene University where he was a starting shortstop and sometimes designated hitter on the Tiger baseball team. Upon graduation, he became an infantry officer in the United States Army rising to the rank of Captain. It was during his time in the military that John developed a love for the game of tennis. After resigning his Army commission, John embarked on his second career as a teacher/coach. In his twenty-seven years as a high-school teacher, he was the head coach of five varsity sports: football, basketball (both boys and girls), baseball, track (both boys and girls) and tennis (both boys and girls). John started the tennis program at Valley Union High School in Elfrida, Arizona. At that time, except for the court he built in his backyard, the closest tennis courts were twenty miles away. Not to be deterred, he raised enough money to buy two portable nets. Then after lining out two courts in the parking lot, they started practice. Within ten years, the program had produced four state finalists, one state champion, and six collegiate tennis players. Next, John coached high school tennis at the 4A and 5A levels for seven years in Texas before moving on to coach at Tabor College, a member of the Kansas Collegiate Athletic Conference (NAIA). In his seven years at Tabor College, his teams have shown consistent progress. His women's team rose from 7th in the KCAC to 5th, to 3rd, and then in 2018 became the KCAC conference champions. This was the first women's tennis conference championship in Tabor College history. Not only did his Tabor College teams produce on the court, but they also won the KCAC Women's Tennis Champions of Character award in 2016, 2017, and 2018 as well as being the KCAC's Champions of Character Team for all sports in 2018. In 2018, Coach Ruder was named the KCAC Women's Tennis Coach of the Year, the Central Region Women's Tennis ITA Wilson Coach of the Year and was awarded by Tabor College as the College's Champions of Character Coach of the Year for 2017 and 2018. In his seven years at the helm of the Tabor College tennis program, his teams have produced two NAIA All-Americans with two players ranked in the top twenty-five in the nation, one ranked as high as # 6. At the conference level there have been three KCAC Player of the Year recipients and numerous KCAC All Conference players.