Doing Time Like a Spy: How the CIA Taught Me to Survive and Thrive in Prison (Paperback) 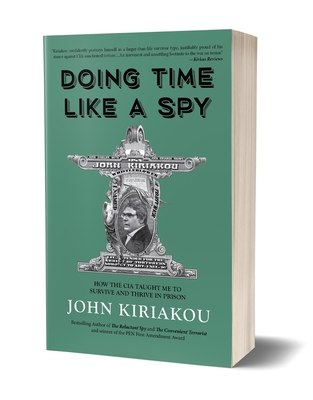 Winner of the 2016 PEN First Amendment Award
Winner of the 2016 Sam Adams Award for Integrity in Intelligence
Winner of the 2016 Blueprint International Whistleblowing Prize for Bravery and Integrity in the Public Interest
Winner of the 2013 Peacemaker of the Year Award
Winner of the 2012 Joe A. Callaway Award for Civic Courage On February 28, 2013, after pleading guilty to violating the Intelligence Identities Protection Act, John Kiriakou began serving a thirty month prison sentence. His crime: blowing the whistle on the CIA's use of torture on al Qaeda prisoners. Doing Time Like a Spy is Kiriakou's memoir of his twenty-three months in prison. Using twenty life skills he learned in CIA operational training, he was able to keep himself safe and at the top of the prison social heap. Including his award-winning blog series "Letters from Loretto," Doing Time Like a Spy is at once a searing journal of daily prison life and an alternately funny and heartbreaking commentary on the federal prison system.

John Kiriakou is a former CIA officer, former senior investigator for the Senate Foreign Relations Committee, and former counterterrorism consultant for ABC News. He was responsible for the capture in Pakistan in 2002 of Abu Zubaydah, then believed to be the third-ranking official in al Qaeda. In 2007, Kiriakou blew the whistle on the CIA's torture program, telling ABC News that the CIA tortured prisoners, that torture was official U.S. government policy, and that the policy had been approved by then-President George W. Bush. He became the sixth whistleblower indicted by the Obama administration under the Espionage Act -- a law designed to punish spies. He served 23 months in prison as a result of the revelation. In 2012, Kiriakou was honored with the Joe A. Callaway Award for Civic Courage, an award given to individuals who "advance truth and justice despite the personal risk it creates," and by the inclusion of his portrait in artist Robert Shetterly's series Americans Who Tell the Truth, which features notable truth-tellers throughout American history. He won the PEN Center USA's prestigious First Amendment Award in 2015, the first Blueprint International Whistleblowing Prize for Bravery and Integrity in the Public Interest in 2016, and the Sam Adams Award for Integrity in Intelligence, also in 2016. Kiriakou is the author of The Reluctant Spy: My Secret Life in the CIA's War on Terror and The Convenient Terrorist: Abu Zubaydah and the Weird Wonderland of America's Secret Wars.