The Quest for Community: A Study in the Ethics of Order and Freedom (Paperback) 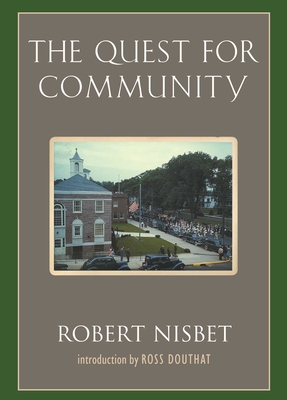 One of the leading thinkers to emerge in the postwar conservative intellectual revival was the sociologist Robert Nisbet. His book The Quest for Community, published in 1953, stands as one of the most persuasive accounts of the dilemmas confronting modern society.

Nearly a half century before Robert Putnam documented the atomization of society in Bowling Alone, Nisbet argued that the rise of the powerful modern state had eroded the sources of community—the family, the neighborhood, the church, the guild. Alienation and loneliness inevitably resulted. But as the traditional ties that bind fell away, the human impulse toward community led people to turn even more to the government itself, allowing statism—even totalitarianism—to flourish.

ISI Books is proud to present this new edition of Nisbet’s magnum opus, featuring a brilliant introduction by New York Times columnist Ross Douthat and three critical essays. Published at a time when our communal life has only grown weaker and when many Americans display cultish enthusiasm for a charismatic president, this new edition of The Quest for Community shows that Nisbet’s insights are as relevant today as ever.

Robert Nisbet (1913–1996) was a professor at Columbia University and the author of The Sociological Tradition, The Social Bond, The Present Age, and other books.