Let Me Tell You About Alex: Crazy Days and Nights on the Road with 'The Hurricane' (Hardcover) 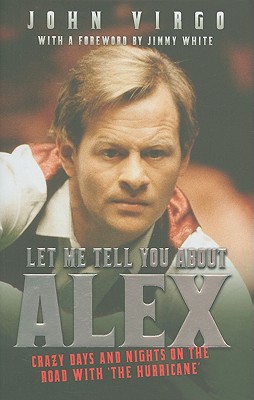 There is a tribute book to be written about the nicest man in snooker—but this isn't it. Whatever else he was, Alexander Gordon Higgins wasn't nice. Unpredictable, wild, demonic and obsessive for certain. The People's Champion. An unstoppable force who single-handedly transformed snooker from a niche sport into a gripping phenomenon. When snooker was at its most popular in the 1980s, Higgins was at the peak of his powers. It was no coincidence. John Virgo knew Higgins as well as anyone. He made no apologies for his friend and was frequently driven to despair by his antics. The gambling, the drug-using, the sheer, uninhibited madness of the man. But there was always a buzz around Alex, there was always something happening. Drawing upon unrivalled access to the Hurricane's friends and colleagues, this is an affectionate and honest portrait of the most legendary player ever to hit the world of snooker. Recounting the legends, dispelling the myths and telling the whole, extraordinary truth, this is Hurricane Higgins by those who knew him best.

John Virgo is a former top snooker professional. In 1979 he reached the semi-finals of the Embassy World Snooker Championship and later that year became the UK champion. John was a well-respected board member of the World Snooker Association where he served for two years as chairman during the Alex Higgins years. John is a BBC snooker commentator and during the 1990s was the co-star of the BBC's Big Break.