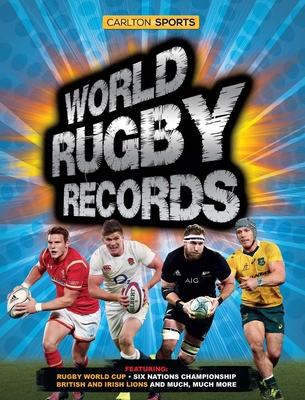 By Chris Hawkes
Email or call for price
Hard to Find

The IRB Rugby World Cup 2015 was magnificent--and this new edition of World Rugby Records looks back at that exciting event and forward to RWC 2019 in Japan.
Fully revised and updated to include the 2016-17 season, this book is a must-have for any fan eager to learn more about international rugby and its great history. Beginning with that apocryphal moment in 1823 when William Webb Ellis allegedly picked up a ball on the playing fields of Rugby School, it covers the legendary feats of sporting heroes such as Bryan Habana, Dan Carter, and Jonny Wilkinson, as well as contemporary stars such as Prince Obolensky, Colin Meads, and Anthony Foley. Action-packed photos bring the sport and its players to life, and the insightfully written record book continues to set the standard for rugby facts and stats.

Chris Hawkes played professional cricket for Leicestershire CCC, as well as sampling club cricket around the world, before moving into publishing. He edited the bestselling Cricketer's Who's Who annual (Queen Anne Press) for many years and has written numerous books on cricket and other sporting topics, including The Complete Encyclopedia of Golf, 1001 Sporting Records, and World Twenty20 Annual 2009 (all published by Carlton). He is also in demand as a sporting analyst on both radio and television. He lives in London.