Health Care Revolt: How to Organize, Build a Health Care System, and Resuscitate Democracy—All at the Same Time (Paperback) 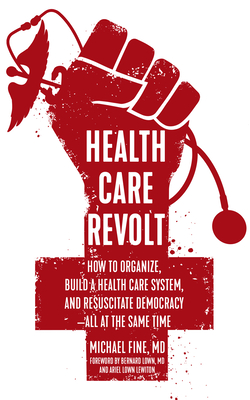 Today’s deliberations about a revamped health care system are stuck—in need of fresh analysis and a new vision. Health Care Revolt sets out to provide just that and at a most propitious time in U.S. history. Dr. Michael Fine’s manifesto frames the questions more expansively than others before him and offers an impassioned road map for a nation confused about which health care direction to travel. The crux of Dr. Fine’s argument is that the U.S. has put the fate of its health care in the so-called marketplace, where the few profit from the public’s ill health and accelerate the erosion of democracy in the process. Health Care Revolt looks around the world for examples of health care systems that are effective and affordable, pictures such a system for the U.S., and creates a practical playbook for a revolution to protect health and strengthen democracy.

Michael Fine, MD, is a writer, community organizer, physician, and senior health strategist Central Falls, RI and Blackstone Valley Community Health Care. Dr. Bernard Lown is professor emeritus of cardiology at the Harvard School of Public Health and the developer of the direct current defibrillator. He cofounded the International Physicians for the Prevention of Nuclear War, an organization that won the Nobel Peace Prize. Ariel Lown Lewiton is a writer and editor whose work has appeared in the Los Angeles Review of Books, the National, VICE, the Paris Review Daily, and elsewhere.

“Dr. Fine’s prose carries a clarity and sense of urgency that are motivating to an increasingly impatient profession and public. This book should inspire the nation to make a break with the same old political mess that is bankrupting Americans and undermining our democracy.” —David H. Bor, MD, chief academic officer, Cambridge Health Alliance

"Health Care Revolt by Dr. Michael Fine is a critical read about what we need to do for the future of our health care system in America. In Central Falls we have now experienced the benefits of a neighborhood health station that has the capacity to serve the majority of the community and focus on preventive care. This model focuses on tackling health care issues from a grassroots level.” —James A. Diossa, mayor of Central Falls, RI

"Michael Fine is one of the true heroes of primary care over several decades." —Dr. Doug Henley, CEO and executive vice president of the American Academy of Family Physicians

"In this trenchant and accessible diagnosis of the ills plaguing American healthcare, Fine, a family physician and former director of the Rhode Island Department of Health, argues that America has 'a healthcare market, not a healthcare system'—and everyone is worse off because of it... This book is an informative, insightful introduction to a complex topic." —Publishers Weekly

"Whether you work in health care or just want good health, and that covers pretty much everyone, Health Care Revolt is a must-read. We deserve better than the expensive and ineffective mess we have now." —G. Wayne Miller, http://www.providencejournal.com/entertainmentlife/20180906/book-review-former-ri-health-director-michael-fine-issues-clarion-call-for-health-care-reform

Dr. Michael Fine believes that the for-profit model has completely corrupted our health care system and that addressing these concerns could be the most important issue facing our country. He joins us to discuss how we got here, the obstacles preventing true reform, and how he believes we can still create a health care system that serves everyone. —Interview, WBUR Radio Boston

"This is a revolutionary book. The author incites readers to embark on an audacious revolution to convert the American medical market into the American health care system. Dr. Fine is realistic; he acknowledges that it will be decades before this goal is attained, but emphasizes that it is time to begin." —T. P. Gariepy, CHOICE