Philly Special: The Inside Story of How the Philadelphia Eagles Won Their First Super Bowl Championship (Paperback) 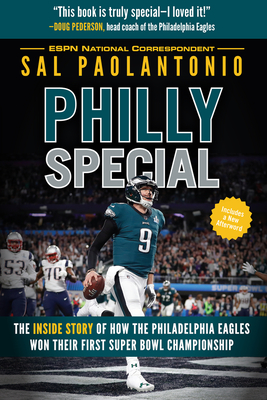 ESPN's Sal Paolantonio takes readers inside the Eagles' improbable 2017 season, one which culminated in the franchise's long-awaited first Super Bowl victory—from their hot start in the fall with nine straight wins, to the unfathomable loss of star quarterback Carson Wentz, to the sweetest victory over the New England Patriots in Minnesota featuring the unforgettable "Philly Special," and finally to the raucous celebrations on Broad Street. Through exclusive interviews, fans will learn how Philadelphia overcame Wentz's season-ending injury which instantly branded them underdogs, gaining inside perspective into the dynamic between head coach Doug Pederson, back-up quarterback and eventual Super Bowl LII MVP Nick Foles, and the many individuals who stepped up and answered the call at the right times. Paolantonio captures the mood of the team week by week, every step of the way, profiling numerous key players, coaches, and more.

Sal Paolantonio is the longest-serving NFL sideline reporter in ESPN history, an Emmy Award winning national correspondent for the Worldwide Leader in Sports, covering the NFL for SportsCenter and Sunday NFL Countdown. He is the host of NFL Matchup. He serves as an enshrinement selector for the Pro Football Hall of Fame in Canton, Ohio. He is a former sportswriter and political correspondent for the Philadelphia Inquirer and served as a surface warfare officer in the U.S. Navy. He lives in Moorestown, New Jersey.

“This book is truly special—I loved it!” —Doug Pederson, head coach of the Philadelphia Eagles

“This book is the story of redemption and resilience, of taking chances and beating the odds. It’s what we love about football and teamwork and sports in America. You will not be able to put it down. Philly Special is truly special.” —Dan Patrick, host of The Dan Patrick Show

“Philly Special is special because of Sal Paolantonio. Sal takes you behind the curtain for an indepth look at why the Eagles had a one of the greatest runs in NFL history. The unprecedented access Sal received from the Eagles organization gives readers information that you flat out don’t get anywhere else. A must-read for any football fan!” —Ron Jaworski, NFL analyst and former Eagles quarterback

“No matter how passionate and informed a fan you are of football or the Eagles, you do not know the whole story of one of the most consequential and improbable championships in NFL history until you hear it from Sal. Details and insight you will not get anywhere else make this book a must for anyone who has ever sung ‘Fly Eagles Fly’!” —Mike Greenberg, host of ESPN’s Get Up!