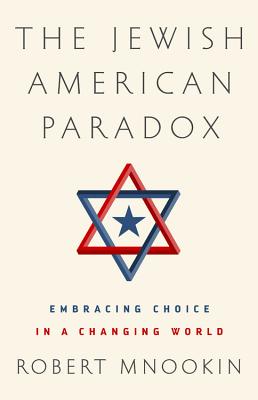 Who should count as Jewish in America? What should be the relationship of American Jews to Israel? Can the American Jewish community collectively sustain and pass on to the next generation a sufficient sense of Jewish identity?

Can the American Jewish community collectively sustain and pass on to the next generation a sufficient sense of Jewish identity in light of these challenges? Who should count as Jewish in America? What should be the relationship of American Jews to Israel?

In this thoughtful and perceptive book, Robert H. Mnookin argues that the answers of the past no longer serve American Jews today. The book boldly promotes a radically inclusive American-Jewish community -- one where being Jewish can depend on personal choice and public self-identification, not simply birth or formal religious conversion. Instead of preventing intermarriage or ostracizing those critical of Israel, he envisions a community that embraces diversity and debate, and in so doing, preserves and strengthens the Jewish identity into the next generation and beyond.

At Stanford, he chaired the Jewish Community Federation and served as president of the Stanford Hillel Foundation. Between 1994 and 2003, he served on the International Board of the New Israel Fund as its Secretary and Treasurer. A leading scholar in the field of conflict resolution, Professor Mnookin is the author of nine books, including most recently Bargaining with the Devil: When to Negotiate, When to Fight.

"An accomplished facilitator of negotiation, Robert Mnookin offers a master course in negotiating the most important questions a person--or a people--can confront. His focus on the contemporary challenges of Jewish identity--whether religious, social, familial, or ethnic--illuminates the larger issue of what it is to be self-critically human in a world for which few feel sufficiently prepared, much less at home. The Jewish American Paradox is an important book for Jews, Americans, and everyone who hopes for a better future."
—James Carroll, author of Constantine's Sword and The Cloister

"Mnookin
presents a terrific case that Judaism should be a welcoming umbrella. My
whole Jewish education was based on what you cannot do, what you cannot eat,
when you cannot drive, play ball, etc. This book focuses on what you can do--embrace
an ancient tradition and identify with a group. It is a call to stop
feeling oppressed--an optimistic, almost non-doctrinal, evangelism."—Harold Holzer, Lincoln historian and director of Roosevelt House at Hunter

"In a book at once deeply personal and deeply learned, one of
America's leading intellectuals invites us to a fascinating conversation about
what it means to be Jewish in contemporary America and the challenges facing
the American Jewish community."—Robert D. Putnam, professor of public policy, Harvard, and author of American Grace: How Religion Divides and Unites Us

"Mnookin . . . uses
his considerable negotiation talents to gain a better understanding of, and to
help us navigate the complexity of the American Jewish identity."—Mount Vernon Times

"Mnookin jumps off the pages as a master teacher, a charming intellectual companion. He knows how to challenge substantively, disagree agreeably and spark discussion amicably. His book beautifully summarizes modern Judaism - and the modern Jewish American condition.... And he's practical not just theoretical."—Jewish Journal

"Utilizing his
expertise in the art of negotiation, Mnookin makes his case for a definition of
Jewish identity that is wide and inclusive, knowing full well that many will
disagree. In this respect, Mnookin is brave; while many writers have unpacked
the challenges and questions of modern Jewry, few have the courage to try to
answer those questions."—The Jewish Book Council

"The questions that this book raises are right on target and should be considered by all of us."—The Jewish Advocate

"Robert Mnookin has composed a challenging roadmap for American Jewry. Traditionalists will dismiss it as further proof of American Jewish decline. But others will rejoice that a serious voice from the less religiously observant Jewish majority sings so clearly, directly, and potentially instructively about the American Jewish future."—Florida Sun-Sentinel

"An extremely thoughtful and readable book. It allows the reader to get an inside view of the thinking that many American Jews may share but from the pen of an astute and highly-thoughtful individual who has extensive training in analyzing issues, policies, and approaches."—American Jewish Archives Journal