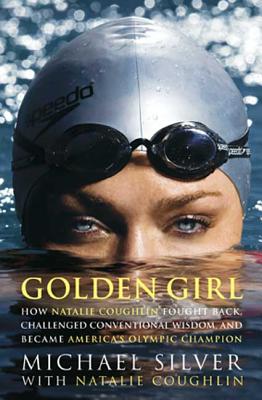 By Michael Silver, Natalie Coughlin
Email or call for price
Hard to Find

Five years ago, Natalie Coughlin's promising swimming career was all but extinguished when a devastating shoulder injury ended her dreams for the 2000 Olympics. After becoming, at age 15, the first person ever to qualify for all 14 women's events at the U.S. Nationals, she seemed destined to follow the path of so many other young swimming stars—devoured by an oppressive training schedule.

In Golden Girl, Sports Illustrated's Michael Silver—coauthor of many bestselling sports memoirs—including Dennis Rodman's, Kurt Warner's, and Jerry Rice's—tells the story of Natalie's remarkable journey back from the brink. With complete access to her family, friends, coaches, teammates, and adversaries, Silver details how she made the crucial choice to train with University of California coach Teri McKeever. Together the two, star and coach, have defied long-standing training methods, forcing the swimming community to rethink the ways in which it treats its talent. An inspirational story of a complex and courageous young athlete, Golden Girl is also a fascinating portrait of the fractious world of competitive swimming.

MICHAEL SILVER, a senior writer at Sports Illustrated, is a highly respected sportswriter and coauthor of several bestselling sports memoirs. He lives in Northern California.

NATALIE COUGHLIN has built a reputation as the most versatile, dominant swimmer in the world. Seizing five medals at the 2004 Olympic Games in Athens—two gold, two silver, and one bronze—Natalie's performance is considered the best in Olympic history by any American woman.