Over the Edge: The True Story of the Kidnap and Escape of Four Climbers in Central Asia (Paperback) 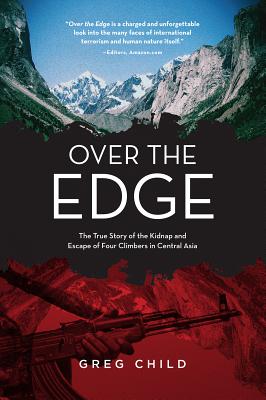 Before dawn on August 12, 2000, four of America's best young rock climbers--Tommy Caldwell, Beth Rodden, Jason "Singer" Smith, and John Dickey--were asleep in their portaledges high on the Yellow Wall in the Pamir-Alai mountain range of Kyrgyzstan. At daybreak, they would be kidnapped at gunpoint by fanatical militants of the Islamic Movement of Uzbekistan (IMU), which operates out of secret bases in Tajikistan and Afghanistan and is linked to Al Qaeda. The kidnappers, themselves barely out of their teens, intended to use their hostages as human shields and for ransom money as they moved across Kyrgyzstan. They hid the climbers by day and marched them by night through freezing, treacherous mountain terrain, with little food, no clean water, and the constant threat of execution. The four climbers -- the oldest of them only 25 -- would see a fellow hostage, a Kyrgyz soldier, executed before their eyes. And in a remarkable life-and-death crucible over six terrifying days, they would be forced to choose between saving their own lives and committing an act none of them thought they ever could. In Over the Edge, the climbers reveal the complete story of their nightmarish ordeal to journalist and climber Greg Child. With riveting details, Child re-creates the entire hour-by-hour drama, from the first ricocheting bullets to the climatic decision that gains them their freedom. Set in a region rife with narcotics and terrorism, this is a compelling story about loyalty and the will to survive. What continues to make it relevant today, 15 years after the events took place, is the geopolitical context -- the incident happened, eerily, on the eve of 9-/11; the fact that at least two of the four climbers continue to be prominent in the sport; and the details incorporated into the story around the media hype and controversy regarding the climbers and their story.