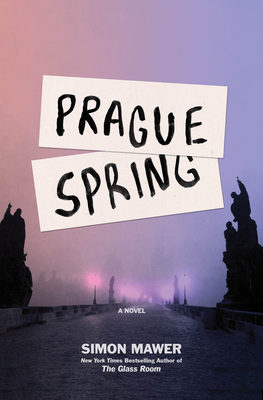 New York Times bestselling author of The Glass Room Simon Mawer returns to Czechoslovakia, this time during the turbulent 1960s, with a suspenseful story that mixes sex, politics, and betrayal.

In the summer of 1968--a year of love and hate, of Prague Spring and Cold War winter--Oxford students James Borthwick and Eleanor Pike set out to hitchhike across Europe, complicating a budding friendship that could be something more. Having reached southern Germany, they decide on a whim to visit Czechoslovakia, where Alexander Dubček's "socialism with a human face" is smiling on the world.

Meanwhile, Sam Wareham, First Secretary at the British embassy in Prague, is observing developments in the country with both a diplomat's cynicism and a young man's passion. In the company of Czech student Lenka Konečková, he finds a way into the world of Czechoslovak youth, its hopes and its ideas. For the first time, nothing seems off limits behind the Iron Curtain. Yet the wheels of politics are grinding in the background. The Soviet leader Leonid Brezhnev is making demands of Dubček, and the Red Army is amassed on the borders. How will the looming disaster affect those fragile lives caught up in the invasion?

With this shrewd, engrossing, and sensual novel, Simon Mawer cements his status as one of the most talented writers of historical spy fiction today.

Simon Mawer was born in 1948 in England. His first novel, Chimera, won the McKitterick Prize for first novels in 1989. Mendel’s Dwarf (1997), his first book to be published in the U.S., was long-listed for the Man Booker Prize and was a New York Times Book to Remember for 1998. The Gospel of Judas, The Fall (winner of the 2003 Boardman Tasker Prize for Mountain Literature), and Swimming to Ithaca followed, as well as The Glass Room, his tenth book and eighth novel, which was short-listed for the Booker Prize. Trapeze (Other Press) was published in 2012.

A Crime Reads Best Book of the Year 2018

“Prague Spring…plunges into the heady days of 1968: the pleasures of new freedoms, the hopes that were brutally crushed, and the politics, both behind the scenes and in the streets. All that you would want from a novel.” —Australian Book Review, Best Books of the Year

“Playing a neat cat-and-mouse game with the reader, [Mawer] gradually turns up the temperature of the novel, shaking us out of our comfort zones…a strong return to the Eastern European setting of his acclaimed novel The Glass Room…affecting and ultimately chilling.” —Kirkus Reviews

“Mawer brilliantly captures the differing shades of naïveté and world weariness that characterize the Czech response to the possibility of greater freedom…[a] smart and touching look at the folly and sweetness of the young.” —Booklist

“Mawer is a superb chronicler of past events in foreign countries, and Prague Springis a wonderfully atmospheric portrait of the city, as well as a political and historical thriller with dashes of espionage. It is as brilliant as anything he has written, which is saying a great deal.” —The Times (UK)

“Mawer’s novels are always rich in intelligence and insight…and Prague Spring is no exception.” —Sunday Times

“Masterly and chilling…as good as anything Simon Mawer has written; which means it is very good indeed.” —The Scotsman

“Engaging…Mawer’s prose is crisp, electrified by a sense of menace.” —Daily Mail

“The tumultuous events of 1968 make a fascinating backdrop to this intelligent drama that follows the fortunes of four people caught up in the Russian invasion. Superbly written, poignant and polished, this story will haunt you.” —Sunday Mirror

“A cracking fictional tale set in a beautifully researched (and very well-chosen) slice of history…the reader is always aware that the political and social excitement Mawer captures so well was tragically misplaced. Yet, knowing more than the characters do only serves to crank up the tension—and to make their optimism all the more heart-rending—as the climactic invasion approaches.” —Reader’s Digest