Riding for the Team: Inspirational Stories of the USA's Medal-Winning Equestrians and Their Horses (Hardcover) 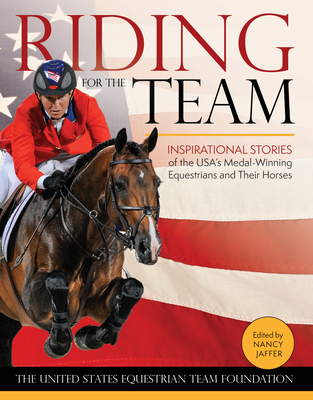 A dazzling, behind-the-scenes look at the incredible equestrian athletes and horses who compete and win for the USA.

From playing with plastic ponies and taking their first riding lessons, to finding success in the arena, thousands of horse lovers hope they can one day represent the United States in international competition. Riding for the Team chronicles the lives of those who dreamed about competing for their country and "made it," sharing inspirational stories from the international governing organization's eight equestrian disciplines:

Readers are immersed in the fascinating histories of the medal-winning riders, drivers, and vaulters who have dominated American equestrian sport over the past 28 years, such as:

Get the inside scoop on legendary horses who have become household names, including:

Offering exclusive insights, Riding for the Team gives readers a behind-the-scenes look at the world of top-level equestrian sport. Athletes tell their stories and those of their horses during the years they honed their talent and dedicated their lives to representing their country in the Olympics, World Equestrian Games, World Championships, and Pan American Games. Beautifully illustrated with breathtaking photographs from prestigious competitions held around the world, Riding for the Team not only provides a dazzling record of American equestrian accomplishment, it promises to inspire the next generation of champions.

The mission of The United States Equestrian Team Foundation is to provide the necessary resources to make equestrian competitive excellence possible, now and in the future. The Foundation supports the competition, training, coaching, travel and educational needs of America's Elite and developing International High Performance athletes and horses in partnership with the United States Equestrian Federation. High Performance programs are developed in the eight international equestrian disciplines of dressage, eventing, jumping, driving, endurance, reining, para-equestrian and vaulting. These programs train and support top US athletes and horses to compete at the Olympics, World Championships, Pan American Games and other major international competitions. USET Foundation is based in Gladstone, New Jersey. Nancy Jaffer is a renowned equestrian photojournalist whose articles have appeared regularly online and in the pages of Practical Horseman and Dressage Today magazines. She has covered nine Olympics and is a contributor to Horse & Hound magazine (UK), Horse International, andIn Stride, and writes the "Due South" column on the Horse Canada website. Jaffer, who has a website www.nancyjaffer.com, wrote a weekly newspaper column on equestrian sports that appeared inThe Star-Ledgerof New Jersey from 1972 until 2015. She is the coauthor ofRiding Throughwith dressage Olympian Debbie McDonald andLife in the Galloping Lanewith eventing Olympians Karen and David O'Connor. She also edited the last USET publication, entitledRiding for America. Nancy makes her home in Peapack, New Jersey.