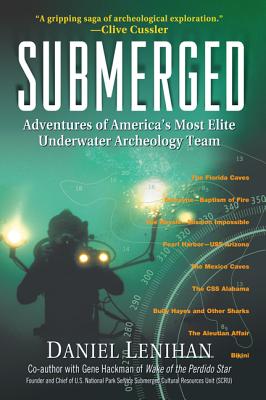 By Daniel Lenihan
Email or call for price
Special Order

Experience a kaleidoscope of real-life underwater missions, ranging from ancient ruins covered by reservoirs in the desert Southwest to a World War II submarine off the Alaskan coast; from the Isle Royale shipwrecks in the frigid Lake Superior to the USS Arizona in Pearl Harbor; from the HL Hunley, the first submarine in history to sink an enemy ship, in Charleston Harbor to the ships sunk by atomic bombs at Bikini Atoll, and much more.

DANIEL LENIHAN, winner of the George Melendez Wright Award for Excellence in Submerged Resources Research, has been diving as a park ranger and archeologist for the National Park Service since 1972, and founded the Submerged Cultural Resources Unit (SCRU) in 1976 before being appointed the first chief in 1980.

Over the last 25 years, Lenihan and the SCRU team have been the subject of national media stories and many TV documentaries on CBS, ABC, BBC, CNN, PBS, The Discovery and History Channels, and National Geographic. He has written frequently for Natural History and American History, and co-authored, with Gene Hackman, the well-received sea adventure novel Wake of the Perdido Star. A native New Yorker and former schoolteacher, he lives with his family in Santa Fe, New Mexico.