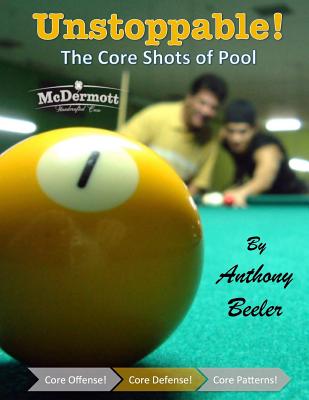 Unstoppable The Core Shots of Pool offers cutting-edge techniques to help you integrate powerful offensive and defensive shots into your game. The book's revolutionary RESPONSE TO INTERVENTION strategies allow you to improve your game significantly by focusing specifically on the shots you struggle with the most. The book is engaging and was designed for players of all skill levels. Beeler teaches you to recognize that every position shot has a specific purpose.

Anthony Beeler is an instructional columnist for On The Break News and Pool and Billiard Magazine. He is a player representative for McDermott Custom Cues and a former BCA National 9-Ball Champion. In addition, Anthony has four top-25 national finishes to his credit. He is a certified instructor for the American CueSports Association (ACS) and is the primary author of the ACS National Billiard Instructor's Manual. Beeler finished the Bluegrass BCA 2014-15 season as the number 1 ranked player in Kentucky, and is also known for establishing the record for most amateur pool tournament victories in one year (62), which was set in 1999. Recently, he also established a new Bluegrass BCA record with the most perfect scores in one season (2013-2014), sporting an unprecedented twelve undefeated weeks of competition. Anthony is also a fully licensed Kentucky teacher with a master's degree in Education Leadership. He has worked in public education for fifteen years. During that time, he worked as a school district administrator for nine years and as a Virtual Learning Consultant for the Kentucky Department of Education for one year. Throughout his pool-playing career, Anthony has won over three hundred pool tournaments and cashed in several professional events. His background and training in the social science field has given him the ability to successfully coach players on both physical and mental aspects of the game.