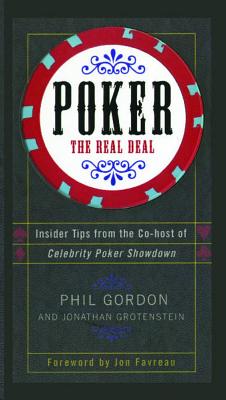 Celebrity Poker Showdown co-host and world-class poker player Phil Gordon shows you how to look and play like a pro in this insider's guide to the poker world.

Like a secret society, poker has its own language and custom—its own governing logic and rules of etiquette that the uninitiated may find intimidating. It's a game of skill, and playing well depends on more than just a good hand or the ability to hide emotion. The first step toward developing a style of play worthy of the greats is learning to think like a poker player. In a game where there are no absolutes, mastering the basics is only the beginning—being able to pull off the strategy and theatrics is the difference between legendary wins and epic failure.

Phil Gordon is a world-class poker player and teacher with two World Poker Tour championships and seven final table appearances at the World Series of Poker.  Since 2001 he has earned more than $3 million in tournament prize money. He is the author of several bestselling books, including Poker: The Real Deal, Phil Gordon's Little Green Book, and Phil Gordon's Little Blue Book. Alongside his teaching and commentary on forty-two episodes of Bravo's Celebrity Poker Showdown, Phil is one of the preeminent poker teachers and writers in the world. Phil currently resides in Newport, Washington with his wife and two young sons.