In This Hour: Heschel's Writings in Nazi Germany and London Exile (Hardcover) 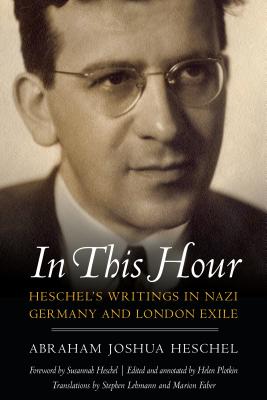 In This Hour offers the first English translations of selected German writings by Abraham Joshua Heschel from his tumultuous years in Nazi-ruled Germany and months in London exile, before he found refuge in the United States. Moreover, several of the works have never been published in any language. Composed during a time of intense crisis for European Jewry, these writings both argue for and exemplify a powerful vision of spiritually rich Jewish learning and its redemptive role in the past and the future of the Jewish people.

The collection opens with the text of a speech in which Heschel laid out with passion his vision for Jewish education. Then it goes on to present his teachings: a set of essays about the rabbis of the Mishnaic period, whose struggles paralleled those of his own time; the biography of the medieval Jewish scholar and leader Don Yitzhak Abravanel; reflections on the power and meaning of repentance, written for the High Holidays in 1936; and a short story on Jewish exile, written for Hanukkah 1937. The collection closes with a set of four recently discovered meditations—on suffering, prayer, spirituality, and God—in which Heschel grapples with the horrors unfolding around him. Taken together, these essays and story fill a significant void in Heschel’s bibliography: his Nazi Germany and London exile years.

These translations convey the spare elegance of Heschel’s prose, and the introduction and detailed notes make the volume accessible to readers of all knowledge levels.

As Heschel teaches history, his voice is more than that of a historian: the old becomes new, and the struggles of one era shed light on another. Even as Heschel quotes ancient sources, his words address the issues of his own time and speak urgently to ours.

Abraham Joshua Heschel (1907–72) was a rabbi, scholar, and philosopher. In 1937 Martin Buber appointed him as his successor at the central organization for Jewish adult education in Frankfurt am Main. In time he became one of the most influential modern philosophers of religion in the United States. He formulated an original philosophy of Judaism, expressed in such foundational books as Man Is Not Alone (1951) and God in Search of Man (1955).

"Up until now, readers of Heschel have known relatively little about these years of uncertainty and upheaval in his life. Now, thanks to the efforts of Susannah Heschel (in whose graceful introduction we learn that Heschel helped his older friend Martin Buber work on his conversational Hebrew before he departed Germany for Jerusalem), Helen Plotkin, and the translators, a new door has been opened. . . . [In This Hour] brings to the attention of the contemporary reader of English some of the least attainable yet most accessible of what Heschel wrote in that period of his life. . . . These essays represent an act of consolation through history, contemporary comment through deflection, and an affirmation of the Jewish propensity for recovery. . . . [They also strengthen] the idea that Heschel’s politico-spiritual action of the 1960s is best understood in the context of these stirrings of spiritual resistance in the 1930s."—Michael Marmur, Jewish Review of Books
— Michael Marmur

"For readers already deeply familiar with Heschel's life and work, or curious about his approach to Jewish pedagogy, In This Hour usefully displays his early efforts to articulate a spiritual account of Jewish education, and the commentary by Helen Plotkin is consistently illuminating."—Carlin Romano, Moment Magazine
— Carlin Romano

"In This Hour: Heschel's Writings in Nazi Germany and London Exile . . . is a collection of early writings by the great rabbinic figure and important Jewish thinker, written before he found refuge in the United States. The pieces—about Jewish education, the rabbis of the Mishnaic period, a biography of a medieval Jewish scholar, reflections before the holiday and reflections on issues like prayer and suffering—haven't been previously published in English. The foreword by Susannah Heschel and notes by scholar Helen Plotkin are particularly compelling."—Jewish News
— Jewish News

"The timing of the release of this volume was perfect since we are living at a time when civility and spirituality seem to have taken time off. We are exposed to important and deep learning here that is wonderfully written and drives us to thought."—Reviews by Amos Lassen
— Amos Lassen

"Herschel was deeply learned in Western philosophy and history as well as Talmudic studies. In his goal of recontextualizing tradition, he can speak to readers beyond his intended Jewish audience."—David Luhrssen, Shepherd Express
— David Luhrssen

"Written largely for Berlin Jewry's official news organ from 1935 to 1939-40, these essays fill a significant voice in Heschel's bibliography—his Nazi Germany and London Exile years. Importantly, they also present Heschel's unique insights on the redemptive role of Jewish learning in the Jewish people's past and future: saving Jewish history and the Jewish people from oblivion. The new translation conveys the spare elegance of Heschel's prose, and an Introduction and source notes open the volume to readers of all knowledge levels."—Jewish Book World
— Jewish Book World

“This is a tremendously important work of testimony and erudition in the service of saving Jewish history—and the Jewish people—from oblivion. The essays fill a significant void in Heschel’s bibliography. The academic community will welcome the relatively unknown aspects of Heschel’s development as a teacher and public intellectual, and all readers will appreciate Heschel’s gripping literary testimony in impeccable translation.”—Edward K. Kaplan, author of Abraham Joshua Heschel: Prophetic Witness
— Edward K. Kaplan

“Just when we thought the luminous Heschel canon was complete, we are gifted with this extraordinary volume—a treasure trove of Heschel essays and speeches that have never before been seen in English. At a moment when civility and spirituality hang in the balance, these excavated words from one of our seminal thinkers and teachers could not be more timely or challenging. I hope you give yourself the immense pleasure and education of delving into In This Hour.”—Abigail Pogrebin, author of My Jewish Year: Eighteen Holidays, One Wondering Jew
— Abigail Pogrebin

“A deep learning characterizes all of Heschel’s writings. Here, in particular, Heschel’s extended meditations on Talmudic learning and on repentance are extraordinarily illuminating. The original writing is at once rigorously analytical and prescriptive, at times exhortative and elegiac, and the translation commendably conveys the spare elegance of the prose. Furthermore, the introductions and notes provide historical and personal context in impressively erudite and engaging ways.”—Nathaniel Deutsch, author of The Jewish Dark Continent: Life and Death in the Russian Pale of Settlement
— Nathaniel Deutsch

“This collection of early writings by Abraham Joshua Heschel significantly expands our awareness of his full oeuvre. Readers of Heschel will want to see these prior confrontations with key issues and Heschel’s earliest stages as an activist in response to Nazi persecution.”—Rabbi Arthur Green, coeditor of A New Hasidism: Roots and A New Hasidism: Branches
— Rabbi Arthur Green