The Land Beyond the Sea (Hardcover) 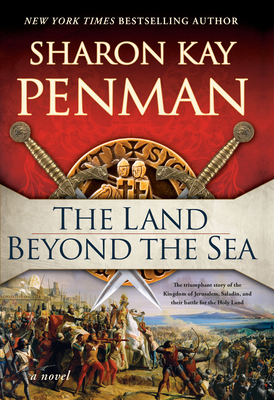 By Sharon Kay Penman
$32.00
Email or call for price

From the critically acclaimed New York Times bestselling author Sharon Kay Penman comes the story of the reign of King Baldwin IV and the Kingdom of Jerusalem's defense against Saladin's famous army.

The Kingdom of Jerusalem, also known as Outremer, is the land far beyond the sea. Baptized in blood when the men of the First Crusade captured Jerusalem from the Saracens in the early twelfth century, the kingdom defined an utterly new world, a land of blazing heat and a medley of cultures, a place where enemies were neighbors and neighbors became enemies.

At the helm of this growing kingdom sits young Baldwin IV, an intelligent and courageous boy committed to the welfare and protection of his people. But despite Baldwin's dedication to his land, he is afflicted with leprosy at an early age and the threats against his power and his health nearly outweigh the risk of battle. As political deception scours the halls of the royal court, the Muslim army--led by the first sultan of Egypt and Syria, Saladin--is never far from the kingdom's doorstep, and there are only a handful Baldwin can trust, including the archbishop William of Tyre and Lord Balian d'Ibelin, a charismatic leader who has been one of the few able to maintain the peace.

Filled with drama and battle, tragedy and romance, Sharon Kay Penman's latest novel brings a definitive period of history vividly alive with a tale of power and glory that will resonate with readers today.

Sharon Kay Penman is the author of historical novels. Among writers who admire her work are Margaret George, Steve Berry, George R. R. Martin, and Bernard Cornwell. Her readers are passionately committed. A lawyer by training, with the publication of her first novel (The Sunne in Splendour—a stunning rendering of the life of Richard III) she became a full-time writer who now has nine historical novels (and four historical mysteries) to her credit. She has lived in England and Wales and currently resides in Mays Landing, New Jersey.

“True to form, Penman again demonstrates her impeccable attention to historical detail….[she] has created a saga of epic proportions. She has given us insight into the inner workings of the minds of the great men and women of the time. There is a lot here to savor, and this book can’t be rushed through.” –Historical Novel Society

“Penman is justifiably renowned for her medieval epics….Working on a large canvas, she illustrates the era’s political movements and the personalities of its movers and shakers with equal dexterity….From fierce battle maneuvers to the emotional corridors of an unexpected love story, readers will feel intimately drawn into the characters’ dramatic lives in Penman’s splendid historical novel. Historical saga fans will pounce on best-selling and always thrilling Penman’s latest, which offers a particularly alluring setting.” –Booklist

“Penman excels at depicting medieval warfare and the unintended, often disastrous consequences of the best-laid strategies. She is equally adept at depicting the rivalries and internecine strife that roil Baldwin’s court….This book amply illustrates the extent to which fortune and personality dictated victory, détente, and defeat on both sides. A teeming 12th-century tapestry which Penman renders coherent, even eloquent.” –Kirkus Reviews

"Penman brings the teeming—and scheming—world of the brief, blazing Crusader kingdom to vibrant life, with a cast of characters that includes the royal houses of Europe, the Knights Templar and the Knights Hospitaller, the lords of the Church, Crusader nobility, and the surrounding Saracens. With her shining gift of storytelling, she makes this tapestry a colorful one, one that weaves all the richness of its setting and striving personalities into a stunning and meaningful whole. Elegant, detailed, and panoramic—like the world it describes." —Margaret George

"As one of Ms. Penman's oldest and most ardent fans, I believe The Land Beyond the Sea ranks as one of her three most accomplished and compelling books. Her books should never be gulped, only savored, and readers will be thrilled to both read and reread her latest." —Priscilla Royal