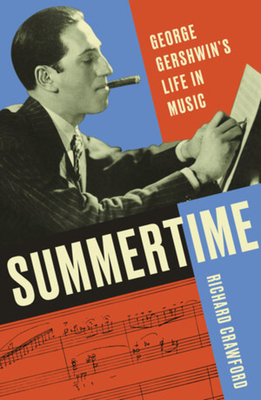 The life of a beloved American composer reflected through his music, writings, and letters.

New York City native and gifted pianist George Gershwin blossomed as an accompanist before his talent as a songwriter opened the way to Broadway, where he fashioned his own brand of American music. He composed a long run of musical comedies, many with his brother Ira as lyricist, but his aspirations reached beyond commercial success.

A lifetime learner, Gershwin was able to appeal to listeners on both sides of the purported popular-classical divide. In 1924—when he was just twenty-five—he bridged that gap with his first instrumental composition, Rhapsody in Blue, an instant classic premiered by Paul Whiteman’s jazz orchestra, as the anchor of a concert entitled “An Experiment in Modern Music.”

From that time forward his work as a composer, pianist, and citizen of the Jazz Age made him in some circles a leader on America’s musical scene. The late1920s found him extending the range of the shows he scored to include the United Kingdom, and he published several articles to reveal his thinking about a range of musical matters. Moreover, having polished his skills as an orchestrator, he pushed boundaries again in 1935 with the groundbreaking folk opera, Porgy and Bess—his magnum opus.

Gershwin’s talent and warmth made him a presence in New York’s musical and social circles (and linked him romantically with pianist-composer Kay Swift). In 1936 he and Ira moved west to write songs for Hollywood. Their work was cut short, however, when George developed a brain tumor and died at thirty-eight, a beloved American artist.

Drawing extensively from letters and contemporaneous accounts, acclaimed music historian Richard Crawford traces the arc of Gershwin’s remarkable life, seamlessly blending colorful anecdotes with a discussion of Gershwin’s unforgettable oeuvre. His days on earth were limited to the summertime of life. But the spirit and inventive vitality of the music he left behind lives on.

Richard Crawford, professor emeritus at the University of Michigan, member of the American Academy of Arts and Sciences, and past president of the American Musicological Society, has published ten books on American music. He lives in Michigan.

Richard Crawford’s book on Gershwin’s life and music, elegant and authoritative, is an irresistible match: one of the great historians of American music writing about one of the greatest American composers. Every chapter is filled with deep knowledge and insight, written with charm and captivating prose.
— Thomas Brothers, author of Help! The Beatles, Duke Ellington, and the Magic of Collaboration

The ‘in’ in Summertime’s subtitle promises both a context and a method: to place Gershwin’s life in the wider world of music-making, and to reveal that life in terms of the very music Gershwin made. Balancing massively rich research with detailed yet always lucid analysis and a master’s knack for storytelling, Crawford superbly fulfills these promises, and then some. With Summertime he makes both Gershwin and his music come alive afresh.

— Larry Stempel, author of Showtime: A History of the Broadway Musical Theater, professor of music and American Studies, Fordham University

An engaging focus on the music, scrupulously covering all the musical comedies in detail as well as the classical compositions and film work. [Crawford] effectively interweaves what was happening in Gershwin's personal life into the story of the songs and shows, rather than the other way around....A worthy tribute to Gershwin's phenomenal creativity over only two decades.

An engaging chronicle of a brilliant musician....A warm homage to a central figure in American music and theater.