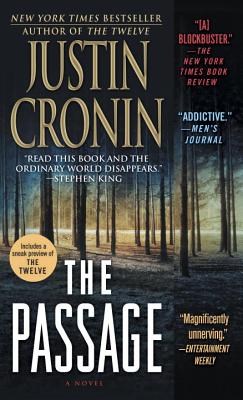 By Justin Cronin
$7.99
Email or call for price

“Justin Cronin's incredible imagination takes the reader on a ride that is engrossing, thought-provoking, terrifying and above all, immensely entertaining. A diverse and engaging cast of characters dot the landscape in this sweeping novel that is both fantastical science fiction and heartbreaking drama. An absolutely thrilling read, The Passage is destined to reach a huge audience and leave everyone wanting more.”
— Tiffany Miner, Book People, Austin, TX

NAMED ONE OF THE TEN BEST NOVELS OF THE YEAR BY "TIME" AND "LIBRARY JOURNAL" AND ONE OF THE BEST BOOKS OF THE YEAR BY "The Washington Post Esquire U.S. News & World Report" NPR/"On Point St. Louis Post-Dispatch BookPage"
An epic and gripping tale of catastrophe and survival, "The Passage" is the story of Amy abandoned by her mother at the age of six, pursued and then imprisoned by the shadowy figures behind a government experiment of apocalyptic proportions. But Special Agent Brad Wolgast, the lawman sent to track her down, is disarmed by the curiously quiet girl and risks everything to save her. As the experiment goes nightmarishly wrong, Wolgast secures her escape but he can t stop society's collapse. And as Amy walks alone, across miles and decades, into a future dark with violence and despair, she is filled with the mysterious and terrifying knowledge that only she has the power to save the ruined world.
Enthralling . . . You will find yourself captivated. Stephen King
Magnificently unnerving . . . "The Stand "meets" The Road." "Entertainment Weekly"
Great entertainment . . . a] big, engrossing read. "The Dallas Morning News"
Mythic storytelling. "San Francisco Chronicle"
The story of Amy continues in "The Twelve, " coming soon. Look for a special preview in the back of the book.

Justin Cronin is the author of "The Passage, Mary and O Neil" (which won the PEN/Hemingway Award and the Stephen Crane Prize), and "The Summer Guest." Other honors for his writing include a fellowship from the National Endowment for the Arts and a Whiting Writers Award. A professor of English at Rice University, he lives with his family in Houston, Texas."

“[A] magnificent beast of a new novel . . . a story about human beings trying to generate new hope in a world from which all hope has long since been burnt . . . What makes The Passage special is the extraordinary level of verbal craft and psychological insight. . . . Cronin has taken his literary gifts, and he weaponized them.”—Time

“A wild, headlong, sweeping extravaganza of a novel, The Passage is the literary equivalent of a unicorn: a bona-fide thriller that is sharply written, deeply humane, ablaze with big ideas, and absolutely impossible to put down.”—Jennifer Egan