The Lost Family: A Novel (Hardcover) 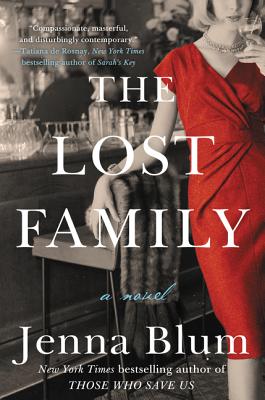 “The characters in Jenna Blum’s The Lost Family are deeply real and unforgettable: a man and a woman both trying to compensate for the losses of their previous families by creating a new family, and the daughter who grows up with them, feeling equally lost. Blum gets so many things effortlessly right: the terror of Nazi Germany; the fluctuating zeitgeist of New York in the 1960s, ’70s, and ’80s; the way the foodie father, the dieting wife, and the eating-disordered daughter all express themselves through their relationship with food. I would recommend it for Meg Wolitzer fans, though Blum’s style is definitely her own.  ”
— Nina Barrett, Bookends & Beginnings, Evanston, IL

"The Lost Family is an extraordinary read, the kind of book that makes you sob and smile, the kind that gives you hope…. It is compassionate, masterful and disturbingly contemporary."—Tatiana de Rosnay, bestselling author of Sarah’s Key

The New York Times bestselling author of Those Who Save Us creates a vivid portrait of marriage, family, and the haunting grief of World War II in this emotionally charged, beautifully rendered story that spans a generation, from the 1960s to the 1980s.

In 1965 Manhattan, patrons flock to Masha’s to savor its brisket bourguignon and impeccable service and to admire its dashing owner and head chef Peter Rashkin. With his movie-star good looks and tragic past, Peter, a survivor of Auschwitz, is the most eligible bachelor in town. But Peter does not care for the parade of eligible women who come to the restaurant hoping to catch his eye. He has resigned himself to a solitary life. Running Masha’s consumes him, as does his terrible guilt over surviving the horrors of the Nazi death camp while his wife, Masha—the restaurant’s namesake—and two young daughters perished.

Then exquisitely beautiful June Bouquet, an up-and-coming young model, appears at the restaurant, piercing Peter’s guard. Though she is twenty years his junior, the two begin a passionate, whirlwind courtship. When June unexpectedly becomes pregnant, Peter proposes, believing that beginning a new family with the woman he loves will allow him to let go of the horror of the past. But over the next twenty years, the indelible sadness of those memories will overshadow Peter, June, and their daughter Elsbeth, transforming them in shocking, heartbreaking, and unexpected ways.

Jenna Blum artfully brings to the page a husband devastated by a grief he cannot name, a frustrated wife struggling to compete with a ghost she cannot banish, and a daughter sensitive to the pain of both her own family and another lost before she was born. Spanning three cinematic decades, The Lost Family is a charming, funny, and elegantly bittersweet study of the repercussions of loss and love.

Jenna Blum is the New York Times and # 1 internationally bestselling author of novels Those Who Save Us, The Stormchasers, and The Lost Family. She was voted one of Oprah readers’ Top 30 Women Writers on Oprah.com and is the co-founder/ CEO of literary social media marketing company A Mighty Blaze. Jenna earned her MA at Boston University in Creative Writing and has taught writing workshops at Grub Street Writers for over 20 years. She interviewed Holocaust survivors for Steven Spielberg’s Survivors of the Shoah Visual History Foundation and is a professional public speaker, traveling nationally and internationally to speak about her work. Jenna is based in downtown Boston, where she lives across from Woodrow’s bench and is currently a dog mom to her black Lab puppy Henry Higgins. For more about Jenna, please visit www.jennablum.com and follow her on Facebook, Twitter, and Instagram.

“Blum avoids the sap of happy endings and easy resolutions in this perfect encapsulation of the changing times and turbulence of mid- and late-20th-century America.”
— Publishers Weekly (starred review)

“This exquisitely crafted and compassionate novel offers a lesson in honesty, regardless of how difficult the truth may be. It will offer plenty of discussion for book groups.”
— Library Journal (starred review)

“Jenna Blum shines a powerful light on how the past swings back and how we must face it. The Lost Family is an extraordinary read, the kind of book that makes you sob and smile, the kind that gives you hope….  It is compassionate, masterful and disturbingly contemporary.”

“Blum plumbs the depths of loss and love in this exquisite page-turner.”
— People

“(Blum) takes on the difficult task of rendering generational trauma visible, and does it with such humor and empathy, you can’t help but be swept along for the ride.”
— Village Voice

“I was spellbound from the start of The Lost Family. The writing is so smart and empathetic.... This is a dazzling novel of great compassion, honestly reckoning with the time-and-place-spanning ripple effect of great pain as well as love.”
— Laura Moriarty, New York Times best-selling author of The Chaperone

“Deftly executed, deeply moving, and full of heart, Jenna Blum’s The Lost Family is an evocative look at the legacy of war and how it impacts one memorable family.”
— Jami Attenberg, bestselling author of The Middlesteins

“This is an excellent character study of how the tragedy of the Holocaust lives on, even to this day. The damage done by the Nazis was not only death and destruction of the Jewish people of the time, but an indelible stain on the lives of all who have lived afterwards, a stain on the world so deep that the true impact of the tragedy may never be known. Blum has created a beautiful novel exploring the intertwining of both love and loss.”
— Jewish News